Digital queuing and welcome management and their effect on customer experience

Queue management is a common challenge, not only for public institutions like hospitals or government offices, but also in the private sector. Retail stores, customer support desks or restaurants and cafeterias – wherever employees are faced with a peak number of visitors during certain times of the day, the issue of serving customers efficiently and in an appropriate order arises.

While drawing numbers on paper tickets has been the de facto standard for decades and still is a widespread practice, there has been a rise in the use of digital queuing solutions in recent years. Whenever you are asked for your name, e. g. when ordering a coffee or a pizza, the reason for that lies in the usage of a digital queuing system. The name you give is linked to your order and used to identify you as soon as your order is ready. The system allows employees to immediately identify who ordered what and fulfill orders accordingly.

Starbucks famously started to implement this practice back in 2012 and while there may have been some acceptance issues in the beginning, the idea has since spread to other chains and areas of business. For telco retail stores, digital queuing and welcoming systems still remain somewhat of a novelty. However, given that the telco business relies so heavily on customer service interactions, it seems plausible that a more personalized interaction between customers and store personnel could lead to an improved customer satisfaction and eventually increased sales and subscription rates.

Exploring the possibilities of digital solutions in the telco sector

This assumption led to research initiated by Austrian software developer NTS Retail, partially in cooperation with the University of Applied Sciences Upper Austria, with the purpose of exploring how customers would react to automated welcoming and queuing systems in a telco retail environment. In a focus group, consisting of individuals from different age groups, professional backgrounds and with different level of interest in technology, participants were surveyed on their preferences concerning customer service and queuing in a retail setting.

The insight gained was then used to create a concept for a queuing system, relying on digital ticketing and a human “greeter” who handled the welcoming process. The actual prioritization and allocation of service time was performed by an algorithm, which calculated estimated waiting times based on current workload, scheduled appointments and time predictions for specific tasks. Customers, whose projected waiting time exceeded a certain amount, were given the option of receiving a text message reminder as soon as a spot cleared up for them or to schedule an appointment for a future date. 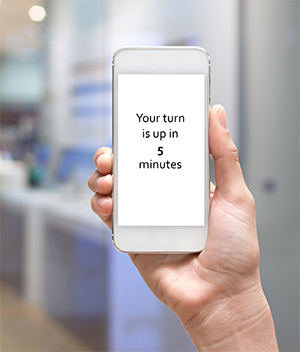 Waiting times and their impact on the reported customer experience

Once the queue management system had been established, the majority of users considered it helpful and felt like their time was being made use of more efficiently. While the actual waiting times were reduced across the board, the perceived waiting times reported by participants were even shorter compared to actual times.

Taking surveys before and after the field test into consideration, it became apparent that perceived waiting times are a key metric regarding the reported customer experience. Although there seems to be a certain “grace period” or basic acceptance for being in line, customers expect to be provided some sort of service shortly after entering a store. Waiting times exceeding a customer’s expectation impacted the reported customer experience disproportionately negatively compared to reverse cases when customers were provided service earlier than they had expected. By all indications, it seems safe to say that customers hate waiting and avoiding long queues should be a key priority for any effort to improve the customer experience in a store setting.

The system was met with a high level of acceptance by the participants. Customers showed much higher levels of acceptance for waiting periods if they were presented with an estimated time beforehand. They responded overwhelmingly positively to the option of making use of their time in between appointments, e. g. by visiting other shops within the same mall. There was virtually no learning curve on the customer’s end, as the welcoming and queuing process was handled by a dedicated store employee. Relying on human greeters to handle the queuing process showed more promising results regarding the reported customer experience than a purely automated solution, e.g. based on self-service kiosks.

Digital welcoming and queue management in the telco sector

The tested solution was optimized specifically to handle workflows, which are typical for telco retail environments like exchanging SIM cards, handing over devices for repair or providing product-specific consultation. Telco stores attract a very diverse clientele with a wide variety of support cases and sales scenarios, creating high workloads for store representatives during peak hours. Although the requirements were defined for a telco-specific queue management solution, most of the findings from the research project can be applied to other industries as well. The usage data and reports gathered since deploying our solution strongly support the results from the initial field study. Digital queue management solutions appear to be a promising response to the emerging need for effective prioritization in customer service environments with high information demands.

Sources:
Research by NTS Retail conducted for a proof of concept phase with Hutchison Drei Austria
“Design Thinking” workshop in cooperation with the University of Applied Sciences Upper Austria
Will you tell Starbucks your name? BBC News Magazine: http://www.bbc.com/news/magazine-17356957