Everybody knows how it works: Draw a number and stand in line until it is finally your turn. A great number of software providers offers queuing solutions, but almost all of them work the same way: You draw a number and wait until it is called or displayed on a screen. The customers are basically downgraded to becoming nothing more than a mere number—a number they even have to get by themselves. Wouldn't it be nice if one could productively use the waiting time, without having to keep looking at a monitor or listen for an announcement?

In retail areas that heavily rely on customer consulting, they are becoming more and more common: queuing systems. In most cases, the first thing you hear in this context is, "Please draw a number!" However, no one really seems to be happy with these existing queuing solutions. This is why NTS Retail has decided to have a closer look at this problem in order to come up with a better alternative.

Together with the University of Applied Sciences in Upper Austria, we organized a design thinking workshop to address this issue. The main objective was to identify problems of the currently existing "Please draw a number" systems within a week and then design a first prototype for an optimized solution to be then evaluated. To achieve this goal, the team conducted a number of field observations and surveys. Amongst the many things that were criticized, the most common complaints were that there was no information on the prospective waiting time and that people pushed in and jumped the queue or were simply tended to before oneself. The strong demand for a more transparent system soon became clear. Customers want to know how long they will approximately have to wait and also want to be able to use this time in a productive way.

After several tests with different prototypes and test subjects, the following solutions proved to be favorable: Upon entering a store, the customer can either choose to get a traditional paper ticket or draw a number via mobile phone. The estimated waiting time is shown on the ticket and also displayed on a large monitor in the store. Instead of being reduced to a number, customers are addressed by their names, however. Each ticket also has a particular time frame in which it is valid. This ensures that even if a customer chooses to run other errands in the meantime, they can still be sure to not lose their place in the queue. The whole thing is rounded off by the possibility to draw a number online, for example, while you are still on your way to the store. Even doing that, the approximate waiting time is still displayed on your ticket. 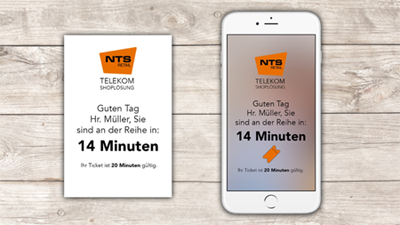 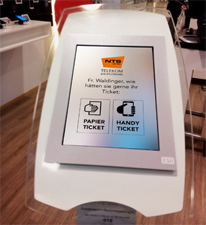 As further analyses have shown, it only takes small adaptions of the existing queuing systems such as these to significantly improve customer satisfaction. The waiting times can be reduced and feel even shorter than they actually are. Following these first few but very promising results, NTS Retail is now planning further evaluations that can then also be carried out using respective tools. Our team shows great enthusiasm in designing the queue busting system of the future. Both customers and retailers will likewise profit from the new user-friendly solution.